MARISA AND THE BUM – Charity on the street

His clothes were dirty and wrinkled. He needed a shave and his fingernails were dirty and broken. He sidled up to me as I finished pumping gas and said, “Sir. I’m hungry, broke and homeless. Can you spare something to help me?”

“No. Sorry,” I replied, got into my car and drove off. I had no money in my pocket – just a few credit cards. 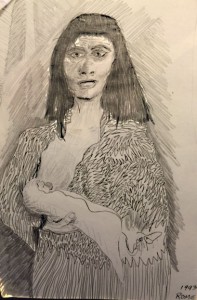 I turned down this woman in Rome, to my regret. Her face haunted me. My guilt led me to sketch her. Boy, I wish I had a “do-over.”.

“What did he want?” my passenger inquired. Daisy, my sweet wife, and I were driving up the coast of the United States for a visit with kin. We were lost somewhere in America. “Oh,” she said and retreated into her book as I navigated back to the interstate, feeling a little guilty.

“I didn’t have any cash,” I explained. “Are you Carrying?”

She rummaged in her purse and came up with two twenties and a five. “Let me have five,” I asked and managed a u-turn rather than getting on the ramp. I drove slowly through the large gas station, clutching the five in one hand. But we did not see the guy and figured he was circulating through the other gas stations clustered about.

My guilt stemmed from an incident in Spain when I was walking the streets of Madrid with Marisa, my darling Spanish sister-in-law. She is a Madrilaña rubia. That is a blond woman from Madrid. She never failed to place a few coins in beggers’ hands when passing such people on the street.

”Why are you giving these people money?” I asked. My usual reaction to beggars had always been to say no and keep on moving. I told Marisa my policy.

She fixed with her dark brown eyes and said, “I understand you Beellie. But my perspective is different. My mother was a refugee during the Spanish Civil War and she was reduced to begging on the streets to feed herself and my older brother. I always think of her struggle to survive and I just don’t care if my money is wasted. I’m giving it to people in need. That’s enough.”

She paused to give some heavy change to tiny woman sitting on a blanket and then looked up at me, defiantly through, her heavy blond bangs.

slowly prowling through the pumps and parking areas.

I found him after a few minutes, called him over to the car, and pressed the five dollar bill into his hand. “Sorry it took me so long,” I said. He looked surprised and scurried away before I could ask for change I guess.

So now it’s 2016 and I don’t carry money except for a few dollars to pay my dues at the Writers Workshop and in case I meet someone in need who can’t accept plastic.

I’m happy to report that my sweet Daisy is now helping strangers when they ask for money. So Marisa – see what you started? More charity on the streets of this sad world.