It was a fine Miami morning in early June 1969, that Saturday morning when I walked into the Royal Castle Restaurant with my five-year-old son Billy.

He was always a bright boy and we were having fun.  Mom and Jeffy, his two- year-old baby brother, were otherwise engaged so that we could have a bonding experience.  I’m pretty sure we had bacon, eggs and grits with white toast.

As I paid the bill I noticed that Billy was acting a bit sneaky.  Parents all know this look.  The kids’ necks grow shorter and they hunch over a little trying for invisibility.

Billy was standing outside on the pale river rocks and pebbles that bordered the hedges, and he was bending over.

I shifted into another parenting mode. “Billy!” I said sternly.  “Those rocks don’t belong to you.  They’re a part of the restaurant’s decor son.  Leave them be and put that one back.”  He had been in the process of slipping a stone into his pocket.  Perhaps, I thought, to chunk at Jeffy when we weren’t looking. 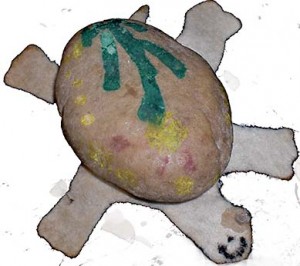 The little guy is getting on in years. He is missing an eye and has only one nostril. Yet he will live in my heart forever as a lesson in parenting.

I forgot about the incident until on Father’s Day Billy presented me with a tissue wrapped gift.  It turned out to be a little turtle with felt arms and legs.  It had a smiling face made with a ballpoint pen and sequin eyes.  There was a yellow flower painted on its back.

The shell was a white rock!

It was a really nice present and I thanked Billy profusely.  I might have even have talked about the rocks at the Royal Castle and apologized.  I don’t remember what I said after thanking him.

I do remember the hurt look on his face when I towered over him and rebuked him for taking a rock.  I wish I’d been kinder.  I’d been trying to give him a lesson but, in the end, it was Billy who taught me to behave better.

I love my turtle and it lives on my desk and in my heart. Thanks Son.

Click here to go to another story about wishes, dreams and prayers.