I am not the world’s worst driver. But I’ve been at it a long time and have made some bad decisions along the way. 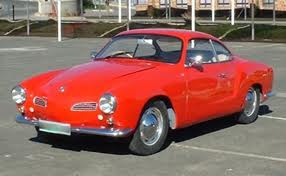 My 1958 VW Karmann Ghia was a very cool compahy car even though it had no air conditioning, radio, gas guage or git-up-n-go.

I had a sporty little 1959 Karmann Ghia for my company car when I was working as the Outside Man for the Installment Loan Department of the First National Bankof Miami in 1960. I covered the Dade and Broward Counties checking Automobile Dealer Floorplan inventories to make sure the car dealers paid the bank promptly each time they sold a car. I also interviewed customers who financed dealer purchased items off the bank premises – like awnings, autos and major appliances. I called the bank once or twice a day to keep in touch.

Far out in Northwest Dade County, the Palmetto Expressway was almost complete and partly open. I was not too familiar with the ramps and signage so I found myself going South in the Northbound lanes. Far ahead I saw a line of cars barreling down at me and realized I’d made a mistake. I slammed on the brakes and made a zippy U-turn to get going the right way. I was accelerating up through the gears with my 32 horsepower motor doing its best and I could see that traffic was catching up. The first car in the line up was a police cruiser.

When I got back to my starting point I used my turn signal, braked hard and made another U turn to get into the correct Southbound lane.

As I revved up my 32 horses to attain highway speed I looked left at the Police car. His lights were on and he was looking at me as we passed – he was braking and I was accelerating through my 4 gears as fast as possible.

He made a U-turn and soon was on my tail and had me pulled over,.

He was very nice. As he walked up I rolled my window down to say, “Good afternoon officer.”

He said pleasantly, “What the Fuck were you trying to do back there Shithead?

So I ‘splained while he checked out the license and registration. Pretty soon there were several other police cars lined up around me with light blazing. It was apparently shift change time in Opa Locka and his supervisor and other interested cops wanted to look in at the action.

“Reckless driving,” was the decision and I had to go to jail in Opa Locka and arrange a $100.00 bond before I could be released. The bondsman wanted $15.00. I only made $60.00 a week so that seemed excessive. I decided to pay the $100. bond in cash but I had no money. I called my dad in Fort Lauderdale and he said no problem. He’d be there in a flash. Or a couple of hours anyways. He knew that I needed cash.

The jailer let me make another 10¢ call. I called Mr. Lytle at the bank and asked if anyone needed me for anything, “Nope Bill. Carry on.”

Whew! I was glad Mr. Lytle didn’t need an explanation about why I was in Jail. That might have had serious consequences.

Dad arrived after a few hours with a $100.00 check. No cash – no help. I would still have to give up a quarter of a week’s salary to poay the bondsman before going about my business and now I’d interrupted my Dad’s day too.

Months later. In due time I stood before a judge accused of reckless driving and told my story. The judge agreed with me. “Not reckless driving – just stupid driving. Careless is the legal term” He had made a little joke. He banged his gavel and said, ” $50.00. Next case.”

The judge was obviously a kind man. So I screwed up my courage to ask a question.

“Your honor,” I ventured. This is my first driving ticket. I already had to pay the bail bondsman $15.00 and I had a nice afternoon in the Opa Locka Jail, so this is costing me $65. I have lost 2 half-day’s work and I only make $60.00 a week. I go to school at The University of Miami 3 nights a week and at the American Institute of Banking 2 nights a week. My Coast Guard reserve duties take another 36 days a year. I’m in a little trouble here. Is there any way I could wash dishes or do something to work off the debt in my spare time?”

He looked at me through bushy gray eyebrows and over his gold spectacles. His black robes looked hot in the un-air conditioned courtroom. He sighed. “All right Mr. Serle. The dish room is fully manned at this moment but I’ll reduce the fine to $25.00. Don’t do stupid driving again.”

I left smiling because I never, ever mentioned to the powers at the bank that I’d spent an afternoon in jail while drawing my $1.50 per hour.

See Poker Night for another story