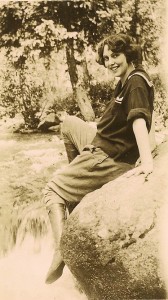 THE WRITTEN WORD IS A POWERFUL THING – My good friend Amy Garza, is an entertainer, historian, writer, editor, publisher, historian and nurturer of writers. A life in the Southern Appalachian Mountains puts a little twangy lilt in her voice when she raises her arm and says, “The written ward is a pawarful thang.”

I am reminded of her words from time to time when I question the value of the journaling, fiction and other writing tasks that occupy my time and energy.

I assert that my writings have brought me closer to my adult children and more accessible to the youngest generation of my family. My On-line book, Bill’s Journey has caused a friend to discover a child he didn’t know about plus 2 subsequent generations. His daughter calls me the Godfather. Just now I am noodling with a book centered on my mother’s letters to her sister, my Aunt, Virginia Roets. Here is the introduction Keep in mind that it is a work under construction.

The follosing is the preface to a book I am working on: EDNA’S LOVE LETTERS AN IMPORTANT LIFE This is a tribute to my mother who died young. It is being written for my children and their children who did not have the privledge of knowing her. I hope it will be appreciated by my new brothers and sister who are dear to me.

PREFACE: I was restless and did not sleep very well one night in December 1989. My mind wandered over a range of matters and I suddenly realized that my 52nd birthday was at hand. I had earlier noticed some wrinkles on the back of my arm and had the feeling that old age was catching up.

My mom, Edna Ketchum Conover Serle, died at the age of fifty-two. Was my time about up? Would I too share her fate – never to know my grandchildren? Would I fade from the scene of life as my friends and contemporaries passed on? Friends tell me of similar ruminations about their own ages and that they too were surprised to have outlived their parents. My birthdays have continued to accumulate and I now can claim to be elderly. Phew!

Now that I have passed the ripe old age of 76, I realize that the end of life can be very sweet. I have been lucky. My wife Daisy and I have been retired for over 10 years, have 13 grandchildren, have had the resources to travel widely, as well as the great fortune to be close to our famlies and many new and old friends.

Edna missed the long life but she left something of herself in the way she raised us and we have in turn passed that something on to our children and see it in the faces of our grandchildren. Love of family, willingness to see the good in mankind, and preference for negotiation rather than confrontation. She was a wonder ful woman and I think I under-appreciated her during her lifetime.

So I offer this little essay in her praise to share with her grandchildren and great grandchildren the super kind of woman she was.

Daisy, my dear wife of 4 decades, never met Edna. But she knows her good heart because of the gift we received from my Aunt Virginia one evening – perhaps it was 1975 or 1976.

Virginia was one of Mom’s older sisters and they corresponded by “Snail-mail” letters for many years because they lived in an era when long distance calls were expensive, inconvenient and reserved for important business people and family emergencies. No email, twitter of facebook for them – not yet invented. The gift was a box of letters she had saved. There were about a hundred letters dated from 1923 through 1956. Half were handwritten and half typewritten.

I am going to share them with you here. Don’t read them all at once. A little at a time would be good for me. Maybe one a day to remind of how our lives have changed. Mom would marvel at the gadgets we take for granted in 2014 – 108 years after her birth. She would be astonished by the number of her direct descendants and the many other family members that are today being rewarded by her good – natured spirit.

The most abundant take-away for me is her loving way of speaking to Aunt Virginia in these letters. And the kind words she uses when speaking about kin, friends and acquaintances.

My sister Janice Serle Newburgh commented that Mom had a hard life filled with the cares of work, limited. funds, few conveniences, fast growing children and the absence of my father William T. Serle, Sr.

Bill, my dad, joined the U.S. Merchant Marine in 1942 rated as a Third Engineer. This was a scary time for Edna as she knew that this was a hazardous World War II service and she had little communication with him when he was at sea. He was at sea most of the time until 1954 when he had to leave his job as chief engineer with the A. H.Bull Company. There was some difficulty about spilling oil into New York City’s harbor during a refueling. As Chief Engineer he was held accountable. Sigh. He went from earning a high salary to starting again in the up and coming air-conditioning business. Lots of things changed for her…

CLICK HERE TO READ MORE ABOUT EDNA ON BILLSERLE.NET