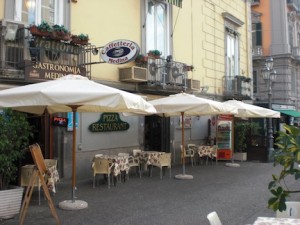 Tony’s Place in Naples.I’m not sure why we went to Naples, Italy. We had other choices – Venetia, Roma, Paris, Firenze or even Moscow. But we thought it would be different to spend a week in the south of Italy – so we did.

Naples, Italy is a gritty city with issues involving trash pickup and pickpockets. Like every big city on earth. I was reminded of our time there this morning when I chanced across some trolley tickets in the bottom of a cabinet.

I remember Pompeii, sunsets over the bay, the Archeological Museum and Mount Vesuvius hovering over the city. There were crowds of Italians everywhere but not so many tourists.

The most memorable things were not the touristy things. There were other elements woven into our visit that stand out in my mind. Tony’s restaurant for instance. We ate there 4 or 5 times because it was close enough to our hotel for an easy prandial stroll.

It was really the Cafe Medina Pizza Restaurant but we named it after our waiter. He took care of us in a crowded and tumultuous atmosphere. The food was wonderful. The folks at neighboring tables would talk to us and Tony would be glad to see us. We spoke broken Spanglish and he spoke Italian. No matter – our Master Card worked like the charm it is.

Pompeii was glorious but the trolley and the the train rides were even more memorable. We paid 2.8 Euros for each one-way ride on the trolley that fetched us to the train station. Upon entering the car we cancelled the tickets in the little machine provided. Transit police showed up a few moments after we sat down, and declared that we were cheating because our tickets were not properly validated. Those thugs with the badges demanded a 60 Euro fine be paid on the spot – or else! 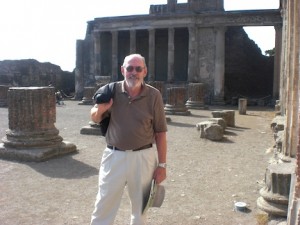 We protested and an intense commotion broke out – seems we were being arrested and were led off the trolley when it stopped at the train station. The other passengers were protesting too – on our side. The matter was resolved in an instant because the trolley hit a pedestrian at a critical moment and and the police attention wandered.

We disappeared into the throng of people seeking trains. Whew. That was close. We purchased tickets and boarded the train in a jostle of passengers.

Did I mention jostle? I was pushed and shoved as I got on after Daisy and just happened to touch my side trouser pocket and felt my wallet going North. I stopped that in a hurry but couldn’t see who done it. I suspected a spectacular blond girl who was sorta looking at me – or – wait a minute – was it my eye on her beauty? Later Daisy assured me that it was 2 guys who jumped off the train in the confusion of the door closing. The blond beauty turned out to be a nice Danish girl on holiday. 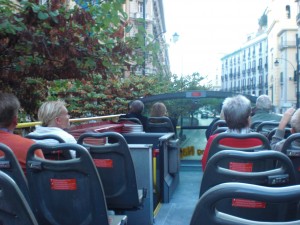 We love the On-and-Off tour buses in the cities we visit.

Wow! – Two incidents in the span of a few minutes. Pompeii was a terrific sight but I remember the restaurant where we had a restful lunch near the train station at the Pompeii end. It was in a beautiful garden and we had a super dinner.

Walking the streets, riding the tourist buses was great fun. The food was Italian.

We will ever forget Napoli. I’m glad we went. We won’t repeat Naples. We’re in love with Italy!