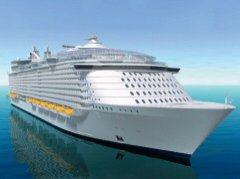 Oasis of the Seas

Journey to Greece, Spain and Albania

This is a follow up to my “PSSST ALBANIA”  post where I said, “If you want to make God laugh, tell her your plans.” Then I went on to tell you about a plan to visit Europe in September 2014.

Daisy and I love transatlantic cruises. We began talking about another voyage in the spring, but we didn’t get serious until our Florida summer was in full bloom. Then began the process of checking prices (a rigorous ritual for Daisy), booking staterooms, hotels and flights.

The final result included a voyage to Barcelona aboard the Oasis of the Seas, flights to and from Corfu, via Athens, hotels in 4 countries and a ferry to Sarende, Albania before taking Norwegian Air back to Florida via Stockholm.

Our ship set a record for carrying 6,000 passengers across the Atlantic. There were also about 2,000 crew. Oasis is the largest ship in the world at this time. It was smooth as glass all the way over and we were well fed and entertained. We met nice people and were happy and comfortable the whole time.

We set some kind of record for the amount of fun to be had on a vacation from life. And we learned a few things. First, the 12 nights on the ship were a blend of new friends, fine food, wonderful entertainment, healthful exercise, and grand artful surroundings. Almost too much to tell. An acrobatic high-diving and 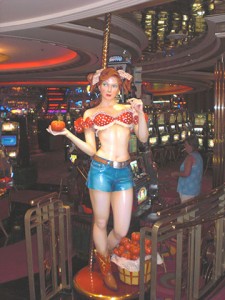 synchronized swimming show with a cast of dozens of beautiful people. An amazing ice-skating show. The comedy club. Singers, Dancers, Magicians and such. Something different every night.

The casino was one of my favorite things to do even though it cost a little most nights. If a beautiful young woman pays attention to me I am transported.

She was tall and had a dark, Mediterranean complexion. A severe look and posture. I was a little intimidated. Women scare me. I sat at her table and offered her $25.00. “It’s all I have,” I feebly explained

She shoved a small pile of chips at me. Four fives and 5 ones. I was her only customer.

I placed the required $6.00 in the little circle and she dealt me a 10 of hearts and a 5 of spades. Not so good but she showed me a 6 of clubs and that is a lousy hand. “Do you want mee to heet you?” she glowered.

I waived my hand palm down indicating that I would stand and she flipped over her down card – the 5 of clubs. She had eleven. Uh oh. Not good for me. She was likely to get a winning 6, 7, 8, 9, 10 or face card.

I asked her, “Where are you from?”

“Bulgaria,” she sneered, as she dealt herself a jack. “Tventy von,” she declared as she swept my money from the table.

I know. I know. The rule is never play cards with a gypsy. But she was captivating. Maybe 30 years of age and a woman who had washed more seawater out of her panties than I had ever sailed even though I was in the Coast Guard.

She smiled her approval of my ‘double down.’ It was the right move. She dealt me a deuce and showed her down card. A king. She won and I was down $18.00.

Only 7 bucks left. Six for the minimum bet and maybe a dollar tip. I ventured again and she dealt me a pair of queens and showed me a seven. “I know I could have split but I only had a dollar left. She gave me a sympathetic look. “Dots der breaks she said. You seem to know the rules.”

So I stood and won. I won again and then over and over again. She seemed to warm up as my bankroll prospered. We exchanged small talk and I rode the little winner’s elevator to the one hundred and fiftieth floor. Meaning that I had actually won $150.00.

No way I could just leave. I stashed two $25.00 chips in my pocket, determined to leave a winner this night. I played with the house money for a good while, learning to love Bulgarians as I gave the casino its money back, little by little.

Barcelona was a blast. Great hotel, super restaurants – Quince Nits on the Plaza Real. All of Barcelona strolled by including a woman who sang in Catalan and sounded like Perry Como. There were Acrobats and tarts. Mostly old couples like me and Miss Daisy. We passed out a few Euros in change to these good entertainers and ate there every night.

We strolled the Ramblas, rode the Metro and saw the people. 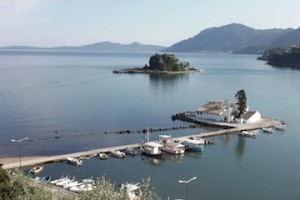 Mouse Island and the monastery at the end of the peninsula were very close to our Corfu hotel.

Corfu, Greece – in a few words. Five enchanted nights. Old, Mediterranean with vibrant street-life. Magic food to make us feel young again. Lots of good people to meet. We rode the local bus every day and sat in cafés, just as God intended us to do. We learned the sad history of the city and saw the shambles of old wars including the war of my childhood, WWII.

Then came the scary part – Albania.

Nikolas the Greek grocer who sold us water and bus tickets every night, screwed up his face at the thought. “Why do you want to go there? So much poverty and crime. Those people have no morals or purpose.”

Angelica, the veteran hostess at the Goldola Ristoranté screwed up her Meryl Streep face and let her shoulders sag. “Don’t use credit cards – cash only,” she whispered. “Never carry your passports. No watches or jewelry. Be very careful.”

“Bill. Tell me again,” Why are we going to Albania?” Daisy grew more apprehensive as our departure time drew nigh. She was quite worried as we boarded the hydrofoil ferry to Saranda. Then we met Hil, The Dutchman and his girlfriend Francine the flautist, who had lived in Havana in Daisy’s old neighborhood.

They were so reassuring. “Albania is wonderful. I’ve been going there every year for 10 years,” he said, “and I can’t wait to be there again.”

He was right. Kind people. Trusting and trusted. It was a beautiful city nestled by the Sea. Playful children, the seaside promenade. Safe at all hours – never a worrisome moment.

We met Hil and Francine again at a café as we were walking the seaside romenade to our hotel. They bought us coffee and told us more about amazing Albania – so rich in spirit, promise, beauty and industry. Albanians have purpose and character. There are more Muslims than Christians.

OOH – AND GUESS WHAT? My great-niece, Margaret Johnson, and her boyfriend Nate, came to see us, all the way from Tirana – an 8-hour bus ride. They were working there to pay their way on a 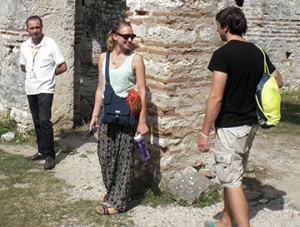 Meg Johnson, boyfriend Nate, and guide Iril in the ruins at Butrint, Albania.

TIME FLEW. It is Corfu Greece again as I write these words and then it will be Barcelona for a couple more nights and then, in a week, home again. And here I am – Happily remembering Kathy and Laslo, Marty and Jan, Ingred, Edith and Amemeigh, Jerry and Betty, Marty and Jan, Marika, Will Hall, The Captain. Captain George, Sophia, Angelo, Tony Liro, the Promenade, Blue Eye, Burint. Tribes, Greeks, Romans, Ottomans, Byzintines, Venetians, Germans, Chinese Communists, the start of the Free-market in 1991. Prejudice.

By the way, our trip home took over 24 hours and involved a longish stopover in Stockholm. Whiling away the hours I read a passage in the Koran that I’d like to share:

Verily! Those who believe, and those who are Jews and Christians, and Sabians, whoever believes in Allah and the Last Day, and does righteous good deeds, shall have their reward with their Lord. On them shall be no fear, nor shall they grieve.

I liked the sound of “Righteous good deeds.”