I love America and I love the U. S. Coast Guard. 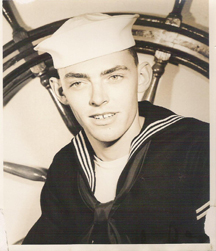 This photo was a graduation gift from the Coast Guard. Our uniforms had 2 stripes sown on even though we had not yet been officially promoted.

Yep. I was quite taken with the idea of emulating my dad and serving the country. He was in the merchant marines in WWII. His last ship was the SS Ines. I got to sail with him once from Baltimore to NYC. I was just a little seasick but it didn’t matter much because most of the trip was at night and I slept as only 14 year old boys can.

November 1958 – I enlisted in the Coast Guard Reserve at age nineteen. The University of Miami had cut off my credit – no more college for me until I paid more tuition. I signed up for 6 months active duty and 8 years of reserve duties. I kept on going, well past the 8 year mark, and retired as a Commander with many good years of experience and a nice pension. It was the best part time job ever. I finally got my degree in 1965.

Boot camp was 16 weeks. So I graduated in March 1959 and was promoted from Seaman recruit to Seaman Apprentice.

My first assignment was aboard the Coast Guard Cutter Unimak for 30 days of advanced seamanship training.

I have a better appreciation of things 55 years later. I wouldn’t trade my experiences aboard the Unimak for all the tea in China. But smooth sailing would not describe that time.

I missed the first 4 days of the posting because I had strep throat and had to be hospitalized. Whew, was I sick. As you can see I’ve recovered. 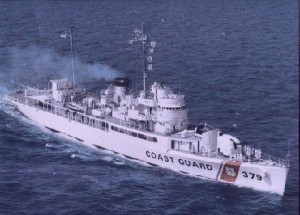 USCGC UNIMAK was a Navy seaplane tender loaned to Coast Guard
in 1948.She served in Central America, the Galapagos Islands, the
North Atlantic, Hawaii, the Aleutian Islands, and the North Pacific.

We spent about a week doing exercises in port at Cape May, N.J. including brief runs out to sea box the compass and conduct drills. We only went aground once. I guess the Captain suffered for that. I had mal de mer the whole time.

The training cruise to Nassau, Bahamas was great. I was seasick most of the time but the Coast Guard didn’t excuse seasickness. I received no treatment or sympathy – just extra duty for being a foul-up. Or some such expression.

We did a training patrol to Nassau, Bahamas. My 8 hours of shore leave in Nassau was one of the high points of my life – but that’s another story.

Plowing into the stormy North Atlantic made me really sick. Huge waves crashed over the bow and slammed into the bridge. We rocked, rolled, yawed and pitched to a fare-thee-well. I carried a bucket and used it a lot. I was losing weight.

March 31, 1959 was a rough night. I slept in the after berthing area. The space must have been about 900 square feet. The racks were stacked 6-high and there were probably 60 men sleeping there.

Men began yelling in panic when we woke in the morning because the compartment was awash with seawater. It sloshed back and forth and up and down getting the bottom racks wet and sweeping our shoes away. What a mess.

The flooding was brought under control, somehow, by persons unknown,  and we proceeded through the day in the normal manner. Normal was not so good. I stayed sick and took the usual abuse for it. It may have made a better man of me.

We had adventures. Storms. Death and rescues at sea. Cold weather and blizzards were the norm. I was like a fly on the wall, observing everything. Well, maybe more like a mouse on the floor. On my knees chipping paint, grinding rust off the steel ship and repainting as soon as possible to keep the rust away. Usually my head was spinning and my stomach stayed in orbit.

I was proud of my weight gain. I enlisted at 165 pounds and graduated at 205 pounds. That was my fittest weight ever. I was sad to have lost 15 pounds in the time I was on the Unimak.

Last night, while thinking about this story, I realized that the berthing compartment flood must have been on April 1st 1959. I can’t prove it, but, in my perception at the time, the permanent crew on the Unimak were a bunch of hostile dudes that hated f-ing reserves. In my heart I now believe that the flood was a prank. 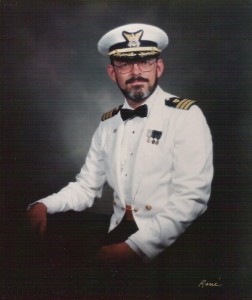 I had this portrait made at the urging of my stepmother Doretha Serle. She wanted photos in uniform from those of her flock who had been in service.